It is our honour to have one of our published writers, Jessica So Yau-nga from BLLS, to share with us the creative process behind her short story, Affair.

This is meant to be two-person partnership. Once there are three, the bond between will be cut. Society does not allow the form of three, and even human body structures come in twos: eyes, ears, hands and feet. Just in pairs. I work in a company selling cosmetic products. I know that my colleagues see me as dull as ditchwater, who work from 6 am to midnight. They all have their own leisure time, from hanging out with their boyfriends to raising children.

That night, after negotiating with my client, I walked by a night club. I had a sudden thought: why not go to a club for the first time in my life. I sat down. I looked around. Then I ordered a glass of wine, but I had to say it three times until the bartender got what I said. I took a sip. I now knew what ‘alcohol’ is. From the reflection of the glass bottle, I could see my face. Thinking about my colleagues, whose eyes were shiny, cheeks were crimson and wearing earrings, I may be an ordinary woman who seldom wore make-up. Then I swallowed more sips that I started to vomit. People next to me escaped.

‘Are you okay?’ A man in a suit asked me and gave me a silk hankie.

I received it with thanks. After settling down, he told me that he had been observing me by the time I stepped into this club.

‘It’s interesting you don’t wear make-up. Look at the other girls here,’ he said.

‘Will you be here tomorrow?’

I am not sure if he was lying, but what he said was music to my ears, for a woman who had never been praised by a guy.

From that day onwards, every day when I knocked off work, I went to that club to meet him. Each time he arrived earlier than me. When he saw me, he flashed a smile.

He rarely talked about his business, or even his own life. There were many questions I wanted to ask him, but I held back. Maybe I was afraid to know his personal life.

At a fixed time at midnight, he would go to the washroom for a while to receive a phone call. I did not know who was calling him, but I forced myself not to think about it. Ignorance is bliss. Perhaps this relationship was not even real. Were we both treating each other as friends? I did not know. But I really enjoyed the way he embraced me. I melt into his arms.

‘Do you love me?’ I asked him in bed. He replied with a kiss on my hand.

Our business continued. Except for one night that something happened. I went to the club as usual. Before I entered, I saw him outside.

‘My friend told me that you’re dating a woman here recently, uh?’

A lady with a beautiful face in silk dress was questioning him. I could tell that she was wearing heavy make-up even from afar.

Only by then I realised I did not even know his name. I thought he would not come the next day, but he did. I saw a ring on his right hand.

‘You always arrive earlier than me,’ I said.

‘This place gives me comfort,’ he replied.

‘What do you mean by that?’

‘You know, sometimes when you can’t find a place you feel comfortable, you suffocate.’

I guess he referred to the state when he stayed at his own home, but the word ‘suffocate’ seemed to imply something.

‘Do you still remember the first time we met? You ordered this thing and you puked.’

‘Of course I do. It’s quite embarrassing, actually.’

‘I guess this would be the last glass of whisky I drink at this place. I used to think it tasted alright, but now I think it’s kind of bitter.’

‘I only want to ask one thing: have you ever loved me?’

At that time, I got the answer. That night, we drank a lot, but neither of us talked much.

I remembered the process of writing Affair was a sudden flow of idea. When I decided to participate in the This and That Journal, I thought really hard about the topic. There were so many topics to choose from and I could not make up my mind. Days passed by but still I had not written anything. One day, all of a sudden, the framework of Affair struck my mind. To capture that moment, I immediately sat in front of a computer to write it down. I was electrified, driven by the stream of ideas. Starting from nothing to something, I savoured every moment in writing the story, indulging myself in another zone. I felt as if I was the creator of a new world. I could make it happen and let it happen.

I believe that everyone can be the author of their little world. Every story is different and unique. Just open up and you will see the way. 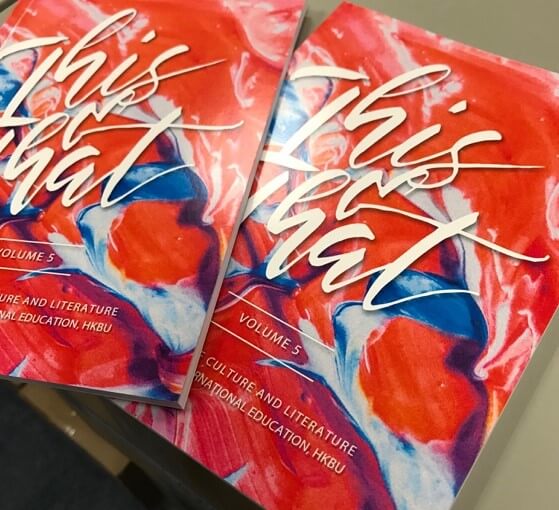